For Love of the Game: How One Woman’s Love for Playing Soccer Became a Business

The fact that soccer has woven itself into nearly every aspect of Brandi Mitchell’s life wasn’t by design. Instead, it has been more of a series of fortuitous events.

Brandi, the founder of San Diego Soccer Women and Soccer Women Play, has become a prominent figure in the world of women’s recreational soccer–not only in San Diego but globally as well.

Her business involves connecting women soccer players of all ages who are looking for teams and tournaments or who want to start leagues of their own.

While the sport of soccer dominates globally, it’s been a slow uphill climb in popularity in the United States. That climb has been even steeper for women’s soccer, save for a few regional areas of the country.

Fortunately for Brandi, she was born into one of those soccer-popular regions–Southern California. And this is when the series of fortuitous events in Brandi’s soccer life began.

How Brandi Got Her Start in Soccer

Brandi was born in 1976, just a few years after Congress enacted Title IX in 1972. The bill prohibited the Department of Health, Education, and Welfare from discriminating based on sex and sought to eliminate disparities in funding for things like athletic equipment, scholarships, training facilities, and coaches. It wasn’t until 1979 that the details of the athletics portion of the bill were finalized.

And so, in 1981, Brandi began her inaugural soccer season in the AYSO (American Youth Soccer Organization) league, and she can never remember a time when she felt disadvantaged because she was a girl.

“I had three sisters. We all played soccer at some point, says Brandi. “I didn’t have any sense of not belonging in the soccer community as a girl. I was given a perfectly comfortable situation, and I had no visibility of what boys were dealing with or not. It didn’t feel like anything was being held back for me.”

Brandi continued playing soccer through high school. She also dabbled in other sports like softball, volleyball, and field hockey. A tough bout with mono sidelined her from soccer during her last year of high school, and it would be another decade until she dusted off her cleats to play again.

She hasn’t taken them off since.

“Around 27, I was working out with a friend who said, ‘Hey, I remember you said you played soccer when you were a kid. Did you know there’s a women’s soccer league in Poway [near San Diego]?” Brandi recalls when discussing her re-entry into soccer as an adult.

Thus began the intersecting of Brandi’s on and off-field worlds. She realized while there were soccer leagues for women, they weren’t necessarily accessible or visible. She sought to change that.

The Small Idea That Turned Soccer Into a Business

The classifieds, the Pennysaver, and Craigslist were the old-school ways local leagues promoted themselves. Brandi put a new spin on things when she launched sandiegosoccerwomen.com about 15 years ago. It was initially meant to be a local San Diego County women’s soccer league and tournament directory. Women who were looking to join a team or teams looking for players could use her website as a resource.

What started as a small side project while she was raising two children has become a much bigger venture for Brandi. San Diego Soccer Women drew the interest of women outside of San Diego, so Brandi branched out with Soccer Women PLAY to be more inclusive of all recreational soccer women globally. Her side project is now a global initiative.

In addition to the website, Brandi manages an associated Facebook group and page, Soccer for Women in San Diego and San Diego Soccer Women. Each has nearly 1,000 and 3,500 followers, respectively. Both are very active with women interested in playing soccer where they live or traveling to play in tournaments.

While Brandi’s organization focuses solely on women, it’s age-agnostic, serving soccer women in their 20s and in their 80s. Yes, 80s. “There are at least four 80-year-olds in the San Diego leagues,” notes Brandi.

Seeing the passion with which women of all ages play inspired Brandi. This led to her next fortuitous soccer experience. Since she didn’t have much skill training beyond high school, Brandi decided to enroll in a soccer class at Miramar College so she could improve her game.

Little did she know this would result in her landing a spot on the women’s collegiate soccer team and her earning the title of team co-captain. At 45 years old, she was old enough to be her teammates’ mother. Fortunately, she wasn’t at a complete disadvantage physically because she was already playing regular recreational soccer games.

Nonetheless, 90 minutes of soccer is taxing, especially when playing with women more than half your age. That’s where Brandi’s experience helped. Years of playing gave her a tactical advantage in decision-making on the field versus trying to outrun a younger player. She played smarter, not harder.

While Brandi has retired from collegiate soccer, she continues to play recreationally and in tournaments. She credits the skills she learned in the college class and on the collegiate team with giving her more of an edge these days.

“I didn’t improve a lot from 27 until my early forties because I was playing very recreationally,” says Brandi. “It wasn’t until I did the Miramar team that I felt like I was getting better and at a new prime–a prime at adult soccer.”

The Evolution of Women’s Recreational Soccer

The world of women’s recreational soccer has gone through quite a change in the 20 years since Brandi began promoting it. The barriers to entry are diminished, and the skill level of female soccer players has grown exponentially. Despite the growth, women in some countries still experience cultural barriers around them playing soccer.

So what is Brandi’s take on what the recreational game was for women and what she thinks will become the next evolution of women’s soccer?

She sees a shift, no doubt.

“Hearing the stories from women who played in leagues 45 years ago, they said you had one game per week, and you were lucky to be out there playing. You didn’t get to grow up with this, “ Brandi notes. “So if you had a baby, you would breastfeed on the sideline, you would sit your kid on the sideline in a pen. Whatever it took to get there and play that game you were going to do.”

These days, it’s different, says Brandi. Women in their 40s have options to play up to seven times a week in some cities, like San Diego. The options for women to play other sports have also expanded over the years.

That’s one reason Brandi thinks there’s actually been a reduction in women’s recreational soccer in the United States. She thinks another reason is that today’s girls start playing much younger and at a much more competitive level than was ever available before. Their bodies take a beating from a younger age, so they might not be able to play when they are older, versus women who picked up soccer later in life.

“The women who are playing now in their 60s generally didn’t play sports when they were young,” Brandi explains. “So their bodies came into sports in their 20s, 30s, 40s, 50s not having all the wear and tear–the hip damage, the knee damage, the ankles. So for them to play later in life is completely possible because they are starting from a fresh point.”

The stage for women’s recreational soccer globally is different. Things outside the U.S. are starting to blossom.

“It’s very recent,” Brandi says of the growth of women’s recreational soccer in countries like the UK, France, and Mexico. “Their timeline is 30 years behind the U.S. It’s still rare to see age divisions older than 30 outside the United States.”

Brandi notes one exception. “There’s a woman down in Peru who had been following me for a while, and she started her own age 30+, 40+, 50+ women’s soccer training, and it’s awesome to see how she’s growing it and marketing it.”

“Everything shows the ages on it, so women know they are welcome,” continues Brandi. “The opportunity is there, and the women are there.”

So while the future of adult recreational soccer for women continually changes, one thing does not. Brandi’s dedication to the sport, both as a player and as a businesswoman, remains constant.

What keeps her in the game? “I think it’s just the chemical adrenaline. The social part is great, but physically feeling what my body can do and the cognitive part it has to go through. I think my brain chemicals just really like it,” says Brandi.

And her grade for the college soccer class she took? An ‘A,’ of course.

Where can YOU Play?

If you’re a woman looking for an adult soccer league near you, check out our directory. There are leagues of all competition levels listed for women. Or visit Brandi’s website. 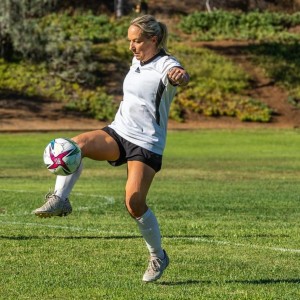 I'm a lifelong soccer player. Took up diving, golf, pickleball, and mountain biking after the age of 45. Sports have helped me physically but also mentally and emotionally. I've built friendship bonds that will last a lifetime. When I'm not playing sports, I'm wine tasting, traveling, or watching mind-sucking reality TV.

Click here to find out more about me and how Adults Play sports got started. 10 Compelling Reasons to Play Sports as an Adult

If you play sports as an adult, you’ll reap all sorts of benefits. Remember, sports aren’t just for kids. Here are 10 reasons to play 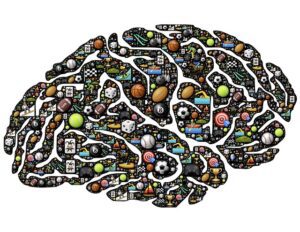 Need a Mental Health Boost? Recreational Sports Might Be The Cure.

Besides the benefit of physical fitness, playing sports as an adult is an incredible way to stay mentally fit. Mental health benefits apply in particular

4 thoughts on “For Love of the Game: How One Woman’s Love for Playing Soccer Became a Business”

Get the latest APS news and special offers delivered right to your inbox.